We welcome Ms. Kiera Lloyd as the Director of the Northern Ireland Bureau, based at the British Embassy in Beijing. As the representative of the devolved government of the Northern Ireland Executive in China, Kiera will continue to work with the Chinese Government and partners in various fields such as economy and trade, education, health and cultural exchanges.

Kiera holds a Master’s degree of Laws and had nearly 20 years of experience in public service, in the fields of justice, policy, and public health, before she joined our Bureau in China.

Kiera talked about our experience in regional partnerships, including the development of sister and friendship cities between Northern Ireland and China. We agreed that it was important to work closely together with CPAFFC in culture and sports exchange programmes as well as battling against the Covid-19. The Bureau expressed appreciation of CPAFFC’s support in securing the PPE for Northern Ireland, and a hope to see more Chinese students to come to Northern Ireland when international travel is safe.

CPAFFC also invited NIB to attend their Ecological Agriculture and Food Safety Forum next month in China International Import Expo, during which we would have further discussion on areas such as agri food and green technology. 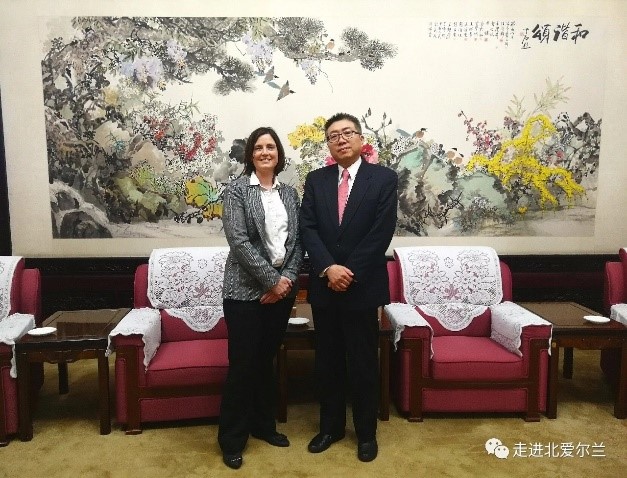 Kiera witnessed the cooperation agreement between Lakeland Dairies and Shanghai Namchow Food Co. Ltd, after which she was given a booth tour of quality dairy products from Northern Ireland. She gave a speech at the MoU signing between Invest Northern Ireland and China Resources Pharmaceutical Commercial Group, the company that secured Northern Ireland’s PPE supply early this year. 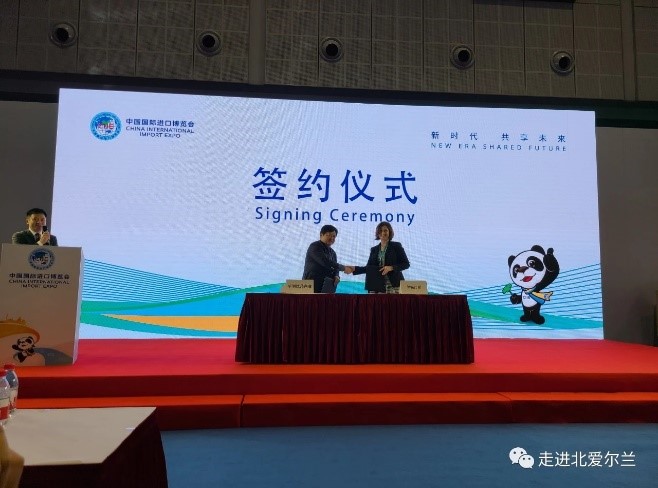 Kiera met with Shenyang FAO and Commerce Bureau, and suggested more creative communications including virtual conferences given the difficulties of visiting each other due to Covid-19. Shenyang also seeks cooperation in education and their blooming sports industry, especially in youth sports exchange and winter sports, said the Sports Bureau Shenyang. NIB China have also travelled to Anshan and met with their Commerce Bureau, Department of Agriculture and Department of Health. Anshan is the third largest city in Liaoning and famous for steel, manufacturing, and resources of hot spring and jade. The city is also strong in agriculture with featured products such as mushrooms and pear brandy, and their chicken have met with EU standards. The two sides discussed cooperation on beer, milk and poultry market, linen products and festive crafts, and exchanged opinions on breast cancer examination. On March 2021 the NIB China met with Huangshi FAO and discussed trade and business cooperation. Kiera together with UK Consul General in Hubei, Gareth Hoar, also visited Hubei Normal University who have been very supportive of our work in China and excellent in promoting cultural exchanges between the two sides.

NIB China was delighted to co-host St. Patrick’s Day Business Breakfast in conjunction with Invest Northern Ireland and the British Chamber on Friday 19 March 2021. The event involved over 70 Chinese, British and Irish businesses.

Kiera gave an intriguing speech on St. Patrick and his relationship with Northern Ireland. Attendees learned about the various investment and business opportunities in Northern Ireland, and were greeted with a traditional ‘Ulster Fry’ breakfast, as well as samples of Northern Irish whiskeys including Hinch and Bushmills. 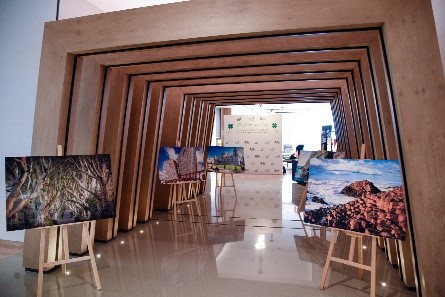 Students from Ulster University and Qufu Normal University shared their interpretation of Confucius stories and celebrated their cultural traditions on the 16th of June. This was the first of a series of activities of the Northern Ireland - Shandong Youth Education & Cultural Exchange Programme. We also had the event recorded and translated into Chinese for all Chinese audience who are interested in Irish literature to relive the night. The NIB China initiated a NI alumni in China programme and hoped to invite everyone who have studied in Northern Ireland to gather together and talk about their time in Northern Ireland. The alumni group is one of the communities that ties the most to Northern Ireland in China emotionally and we hope to provide them an occasion where they’d be comfortable talking about the time they spent in Northern Ireland and play the role of NI culture ambassador to China, promoting NI education, culture and tourism to their family and friends, on social media and in their daily life.

The first of the NI alumni in China events was held in Beijing in autumn 2022, where we invited 80 QUB alumni to join us at the prestigious Ullens Centre for Contemporary Arts to share their memory of Northern Ireland. Northern Ireland excels in Creative Industry and are famous in China with the Game of Thrones filming locations and productions. In March 2022 NIB China held a reception in Beijing and gave a vivid introduction of NI films and TV shows, tourism attractions, music and arts, and many more. The guests left with a better knowledge and interest of Northern Ireland. The event featuring NI’s creative industry and food and drinks was well recognised by our guests and Chinese audience on social media. It’s also a good way to promote NI in China and thus discover more cooperation opportunities in all areas. 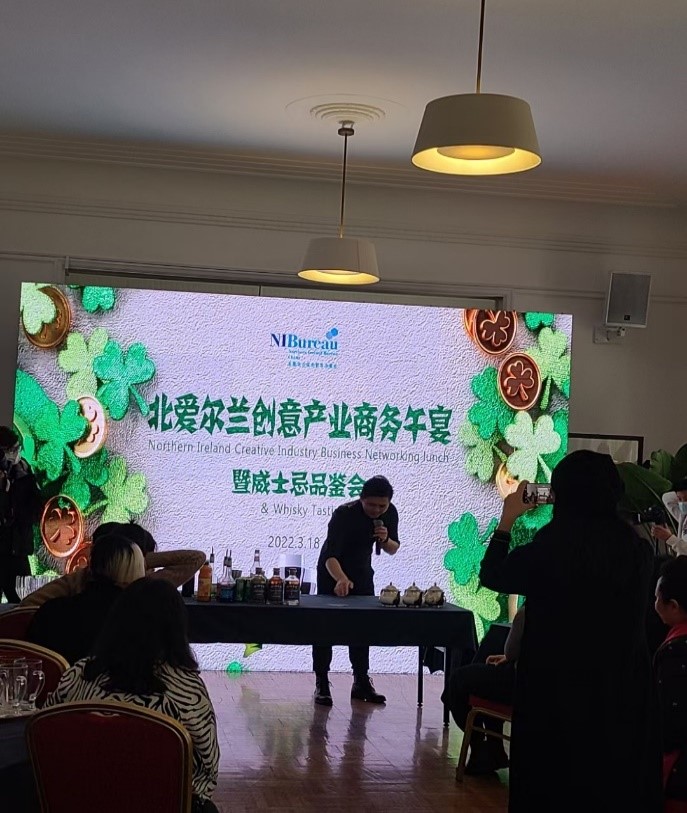 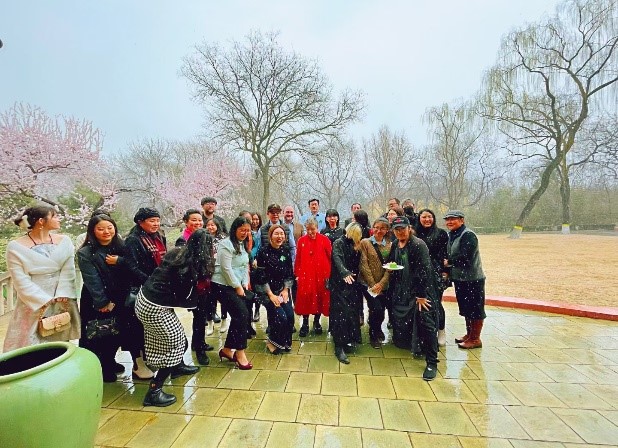 We managed to stay in touch with our regional partners when travel wasn’t possible. Early June 2022 we held virtual meetings with both Anshan and Changchun city to discuss further cooperation opportunities and have reached agreements on programmes on trade and business, youth education, tourism and cultural exchange etc. NIB China also had online meetings with Mid & East Antrim and Newry, Mourne and Down Councils accordingly to discuss how we can better engage with our Chinese partners. Kiera Lloyd plans to visit these partner cities in the following months when travel permits and hope to nail down further details and take these programmes into process. (Can update further when the trip is done.)

Social media takes up more of people’s life each day and NIB China are constantly working on the social media influence. We now have a website in both English and Chinese and a WeChat official account featuring original articles and videos promoting every side of Northern Ireland, its history, culture, education, food and drinks, tourism, business and trade, music, arts and literature. We’re also working with the Embassy, QUB, Arts Council and Tourism Ireland to deliver fresh and interesting news stories of Northern Ireland and of our work in China. Here’s our WeChat ID, follow us for some exciting contents!